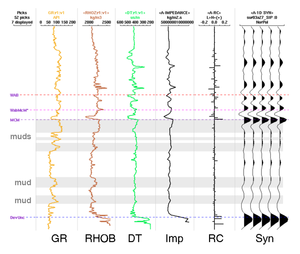 Synthetic seismogram (right) from the reservoir section of the giant bitumen field Surmont, northern Alberta. The reservoir is only about 450 m deep, and about 70 m thick. From Hall (2009), Calgary GeoConvention.

We've had a couple of emails recently about well ties. Ever since my days as a Landmark workflow consultant, I've thought the process of calibrating seismic data to well data was one of the rockiest parts of the interpretation workflow—and not just because of SynTool. One might almost call the variety of approaches an unsolved problem.

I'd go so far as to say that I think tying wells robustly is one of the unsolved problems of subsurface geoscience. How else can we explain the fact that any reasonably mature exploration project has at least 17 time-depth curves per well, with names like JLS_2002_fstk01_edit_cks_R24Hz_final?

Next, think about the seismic volume you are trying to tie to. Keep it to the nears if possible (don't use a full-angle stack unless it's all you have). Use a volume with less filtering if you have it (and you should be asking for it). And get your datums straight, especially if you are on land: make certain your seismic datum is correct. Ask people, look at SEGY headers, but don't be satisfied with one data point.

Once that stuff is ironed out:

I could add some don'ts too...

Well ties are one of those things that get in the way of 'real' (i.e. fun) interpretation so they sometimes get brushed aside, left till later, rushed, or otherwise glossed over. Resist at all costs. If you mess them up and don't find out till later, you will be very sad, but not as sad as your exploration manager.