The short link to the page is ageo.co/unsolvedproblems

The most famous list of unsolved problems came from the mathematician David Hilbert in 1902. Adapting his language slightly:

Who of us would not be glad to lift the veil behind which the future lies hidden; to cast a glance at the next advances of our science and at the secrets of its development during future centuries? What particular goals will there be toward which the leading [geoscientific] spirits of coming generations will strive? What new methods and new facts in the wide and rich field of [geoscientific] thought will the new centuries disclose?

There have been other, similar efforts in various fields:

There have been a few papers on this topic, mostly on the broader questions of geophysics. Some examples:

There are some in geology too:

And in applied geophysics and reflection seismology:

These were published in 1980, when Milo Backus was president of SEG. I don't have the original paper (anyone?), but the problems themselves are quoted in Lines, 2005:

Satinder Chopra has been interviewing people in CSEG's Recorder magazine for over 12 years. Recently, he has been asking people about unsolved problems. These are (extensively) quoted and paraphrased; the originals are online. Apart from the reply by Wang, they are licensed CC-BY by the CSEG.

This wasn't really an interview, per se, but part of a series on general problems in applied geophysics. This was the question in this particular issue:[2]

SC: Distinguishing “fizz water” and “commercial gas” saturations and locating “heavy oil sand units” with surface seismic and borehole data are two challenging problems for us today. How are we meeting these challenges?

This is a tough problem as the exploration geophysics industry relies heavily on P-P reflectivity data and P-wave impedances and contracts to identify stru c t u res, stratigraphy, and potential fluids. As such, this problem is currently unsolved.

He went on to list some of the lines of research being pursued at the time.

I cannot speak to the entire discipline of geophysics, but in the seismic world, I’d say the three most important problems are resolution, resolution, and resolution. We are forever seeking better resolution (horizontal and vertical) from our seismic data so we can better image the seafloor and its subsurface and draw the remotely sensed data closer to reality. There are clearly limitations in physics that we approach but tremendous gains have been made in acquisition and processing technologies in the last decade that take us close to these physical limitations.

I guess I still have to point out our greatest panacea, resolution. We have made great leaps with new acquisition methods, and pre- and post-stack algorithms but we are still working at macro- scales. I'll follow that by perfect velocity determination. If we can understand and measure this field, we go a long way to much better images. Finally these items coming with a fast and less intense footprint, I guess I mean remotely.

As I just mentioned, my crystal ball is a tarnished one, but here are three problems that strike me as important:

SC: Do you think the current levels of R & D being carried out in our industry will be able to solve these problems? If not, then what needs to be done?

Probably not – these issues are basic and surely require many years of dedicated effort. Long term R&D in our industry is by and large dead. Progress might occur in academic environments, but here funding is the big problem. Were our industry ever to find its way to create a jointly funded long-range R&D facility to attack these and other funda- mental problems, that would be wonderful. What comes to my mind here is the French Petroleum Institute (IFP). But I’m not optimistic that the vision is there to make this a reality.

From the perspective of conventional reservoirs some outstanding issues are how to routinely exploit anisotropic information in seismic reservoir characterization and how to utilize spectral decomposition data in AVO Amplitude vs Offset. Two is my limit.

I find the greatest problem I face is scale. We are continuously investigating thinner and thinner reservoirs with subtle characteristics. We're not in the Gulf of Mexico anymore. Reservoir Engineers are the first to point out the lack of vertical resolution in seismic data. That said, there [have] been great strides in recording technologies, processing algorithms, and statistical methods that [are] narrowing the gap.

The second problem I see is similar to scale, but not in the vertical sense. When you mention geomechanics to an engineer, they think of borehole stability. Geomechanics is also involved in the far-field seismic experiment, in that it relates to velocity (compaction), anisotropy, and faults/fractures. Understanding lateral and horizontal stresses and their relation or expression in the near-field (i.e. borehole), is a great problem. Not only for exploiting unconventional reservoirs, but in multi-million-dollar international wells drilling down the flank of a fault.

The third problem I see is more philosophical. When I went to school, much of what I learned could be explained in a pool hall. Angles of incidence, reflections, velocities, all happened in front of your eyes. It was easy to grasp and explain to your manager. Now we have progressed to the world of azimuthal anisotropy, VTIVertical transverse isotropy, HTIHorizontal transverse isotropy, broadband recording... the list goes on. We are becoming very specialized and understanding, let alone explaining, the concepts of geophysics is becoming more and more difficult. We are in danger of isolating ourselves further from the asset team, which deems everything we do a 'science project'. Education and understanding has always been a problem in geophysics, and solving it doesn't seem to be getting any easier.

A very important seismic exploration and monitoring problem is the full integration of rock physics and seismic inversion. Another good one is the missing wavelengths in inversion. I think the most important problem of all is the “missing physics” problem, where we try to quantify and manage the gap between the completeness of a convenient chosen physics model and one that adequately explains our data. The problem includes defining what “adequate” means. These are not easy questions. In my opinion we don’t even know how to pose many of them properly yet, let alone solve them.

I remember watching a Star Trek movie once, and as they neared a new planet, the captain called a geophysicist up to the bridge. All the guy had to do was press a button on the com, and a full 3-D image of the planet emerged on the screen. We haven’t come up with that solution yet.

But seriously, there could be a lot more automation in our processing and imaging, and we could harness modern technology more effectively for better interactive interpretation in terms of both data access and processing while interpreting. Concepts from Big Data could help in that, and in some of the “unsolved problems” where we perhaps don’t yet have an established physical link, or where it’s too expensive to implement the physics.

SC: Considering the challenges we are facing in characterizing the unconventional reservoirs, what kind of change do you think we need to bring into our approach or our workflows?

I think the biggest change that needs to happen is getting out of the mindset that we can accurately model the subsurface cheaply and easily. That’s not to say we shouldn’t be looking for ways to economize – we always need to be doing that – but it’s sort of like that thing you see on people’s office door that says “good, cheap and fast – pick any two.” I’ve already mentioned a couple of areas that I think hold great promise, geostatistics and fracture mechanics. True integration of disciplines is also needed. We talk a lot about integration in our industry, but I rarely see it actually happen. We still work in silos. So in that respect I think organizational culture needs an overhaul.

SC: As you have championed the benefits of integrated shale resource characterization, I would like to ask you about how much value do you think multicomponent seismic data can bring to such an exercise?

There are two world arenas that consider multi-component reflection seismic data (MCRS) somewhat routinely: onshore China and Canada. MCRS has been a topic of research interest in many very qualified university consortia, but has had two stumbling blocks, namely acquisition and processing. In recent years, Arcis, CGG and other companies have developed consistent acquisition QC and analysis standards. The MCRS of horizontally layered media does not cause data processing firms to throw up their hands in painful anguish anymore as well.

Anisotropic media analysis (shale reservoir characterization) provides a useful area where the technology can deliver valuable results not achieved by traditional wide azimuth 3D methods. There are two critical pieces of information necessary for the exploitation of low porosity perm reservoirs (or “shale”): detailed mapping on seismic scale of rock properties in terms of mechanical parameters such as Young’s modulus, Poisson's Ratio, etc.; and the subsurface geostress model. Trying to extract useful data from 3D acoustic data requires the interpreter to make large-scale assumptions in effective homogeneity and isotropic media. But these assumptions can be dropped or loosened if we use multi-component reflection seismic and AVA techniques of mode converted waveforms analysis. I would say we are 80% of the way through this technology evolution, but there are still some problems to be addressed in amplitude restoration and wavelet dependency of simultaneous PS propagation. The work we did in the last 7 years clearly indicates we are capable of analyzing fractured reservoir media in a lateral varying stress environment.

SC: What are the directions in which some of the R and D worldwide is focused in our industry? What is your impression about (a) the important developments that people can expect in geophysics in the near future (b) anything path breaking that we can expect that would revolutionize things, after the 3D seismic adoption in the 1980s and becoming a routine in early 1990s?

I find the usefulness of full-waveform elastic media models to be very encouraging and likely to rapidly influence our interpretation concepts and workflows. Hopefully these concepts can be combined with pattern recognition techniques to support quantitative reservoir characterization.

Daniel Garcia-Castellanos (@danigeos on Twitter) at ICTJA-CSIC Barcelona has been writing about unsolved problems in geoscience for several years. He has collected a great list on his blog: 49 open challenges in earth science[3].

List of unsolved problems in geoscience — Article on Wikipedia 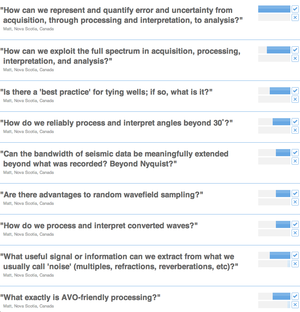