Seismic quality is a meta-seismic attribute — an attribute which is a combination of other attributes.

It is some function of, for example, seismic bandwidth, similarity, reflection strength (AKA amplitude envelope), and signal to noise ratio: 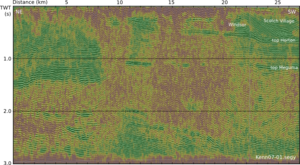 The seismic profile shown in the figure is from the Kennetcook Basin, Nova Scotia. This work was part of a Geological Survey of Canada study, available in this Open File Report.

In this example, the seismic quality attribute was calculated by taking a equally weighted sum of similarity, reflection strength, and bandwidth attributes. Generally speaking, seismic quality can be cast as index that ranges between zero and one, where each of the attributes, ai can be weighted with a coefficient ci, which can be arbitrarily assigned.

In this example, the similarity, reflection strength, and bandwidth attributes were weighted evenly added together in equal proportions. It is good practice to normalize each of the attributes (which might mean clipping spurious values) so that the variations in the data fall between 0 and 1. The user can refer to the histogram of the attribute for a suggestion about scaling.

The attribute is displayed with a 50% transparency on top of the seismic amplitude data, plotted using a grayscale colormap.