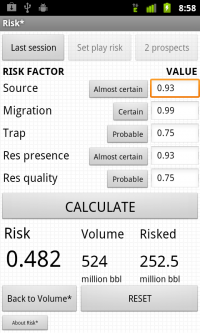 Risk* is a probability calculator app for Android, aimed at subsurface scientists in oil & gas. It was built in Google App Inventor and made available in the Android Market in August 2011.

Designed primarily as a help app for Volume*. 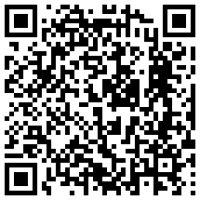 The language used in the qualitative risk pickers (the buttons by the text fields) are based closely on Sherman Kent's words of estimative probability, long used in the US Central Intelligence Agency to describe risk. The only change I made was to make Impossible 0.01 instead of 0, and Certain 0.99 instead of 1.0. I'm just uncomfortable with certainty, but of course there are situations when it is warranted (as for some risk elements in a proven structure or field, for example). I will try to make the list editable in a future release.

In this first public version, there's only one calculation is very simple:

where Prespres and Presqual are the probabilities for reservoir presence and quality respectively.

Exactly how you use the parameters is up to you of course; most organizations have guidelines for this. If you want fewer than five parameters, just sent one of them to 1.