The amplitude A of the Ricker wavelet with peak frequency f at time t is computed like so: 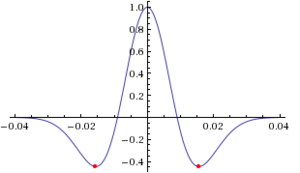 Sometimes the period (somewhat erroneously referred to occasionally as the wavelength) is given as 1/f, but since it has mixed frequencies, this is not quite correct, and for some wavelets is not even a good approximation. In fact, the Ricker wavelet has its sidelobe minima at

These minima have the value

Make one in Python

Here's a snippet from an IPython Notebook by Evan:[2][3]