A type of coherent noise (for most interpreters), caused by seismic energy reflecting from more than one impedance interface. 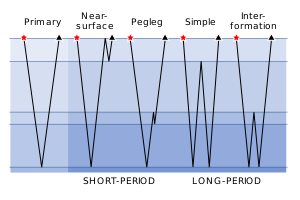 Very common in marine seismic, where the sea surface and sea-floor have very high acoustic impedance contrasts and can set up a very efficient 'echo chamber' effect, with multi-period multiples. (A Rockall example from the Virtual Seismic Atlas would go nicely her, if that sort of —credited—use is permitted Matt 18:34, 12 September 2011 (UTC)).

The cartoon is an attempt to show some different modes of multiple reflections. Multiple reflections off the sides and underneath of salt bodies are also a problem in some basins (Gulf of Mexico, for example).

Some research groups (Stanford, MIT) are trying to use multiples for imaging purposes, since they should in theory be able to boost the signal:noise ratio, not reduce it as they usually do today.