When a geophysicist speaks about pre-stack data, they are usually talking about a particular class of gather. A gather is a collection of seismic traces which share some common geometric attribute. The term gather usually refers to a common image point (CIP) or common mid-point (CMP) gather. Gathers are sorted from field records in order to examine the depedance of amplitude, signal:noise, move-out, frequency content, phase, and other seismic attributes, on offset, incidence angle, azimuth, and other geometric attributes that are important for data processing and imaging. 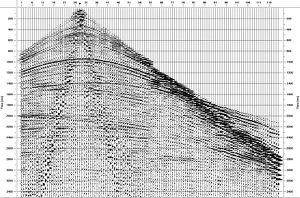 Basic quality assessment tools in field acquistion. When the traces of the gather come from a single shot and many receivers, it is called a common shot gather (see image). A single receiver with many shots is called a common receiver gather. It is very easy to inspect traces in these displays for bad receivers or bad shots.

The stereotypical gather: traces or sorted by surface geometry to approximate a single reflection point in the earth. Data from several shots and receivers are combined into a single gather. The traces are sorted by offset in order to perform velocity analysis for data processing and hyperbolic moveout correction. Only shot–receiver geometry is required to construct this type of gather.

A more sophisticated sorting that takes dipping reflector geometry into account. Not doing so can cause a mis-positioned events, poor imaging, and unfocused reflections. In this case, a priori information about the subsurface, usually a velocity model, must be applied with the shot–receiver geometry in order to construct this type of gather. Common depth point (CDP) is another common term; it's basically synonymous with CIP. 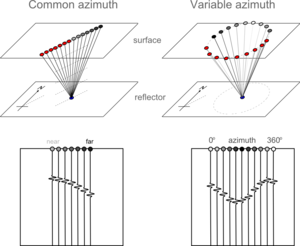 Used for basic quality control, because it approximates a structural section. Since all the traces are at the same offset, it is also sometimes used in AVO analysis; one can quickly inspect the approximate spatial extent of a candidate AVO anomaly. If the near offset trace is used for each shot, this is called a brute stack.

If the offset between source and receiver is constant, but the azimuth is varied, the gather can be used to study variations in travel-time anisotropy from the presence of elliptical stress fields or reservoir fracturing. The fast and slow traveltime directions can be mapped from the sinsoidal curve. It can also be used as a pre-stack data quality indicator.

The need to invoke seismic processing methods beyond simply sorting surface geometries is shown from the ray paths caused by a dipping reflector. In the presence of dipping events, ray paths of a CMP gather do not correspond to a single point in the subsurface. If untreated, this gather causes poor focusing, and inaccurate imaging. The common image point (CIP) gather represents a non-intuitive range of sources and receivers, which is obtain only after iterative applications of migration.