A mode of rock failure. It is an imprecise, relative term. 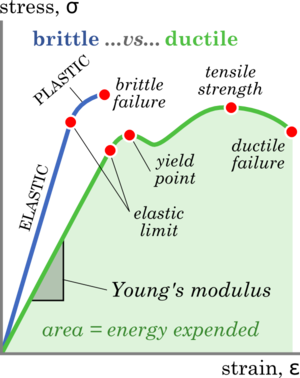 There are several ways to look at brittleness.[1] For example:

Some authors in the mining industry define brittleness index B (loosely defined, but the concept is also called brittleness ratio, brittleness coefficient, or ductility number) as the ratio of uniaxial compressive strength to tensile strength[2][3].

Altindag (2002 and 2003) further showed that the most useful measure may be the mean average of compressive and tensile strength:

He goes on to compare this measure with the ratio method above:

It is shown that the [mean strength brittleness] is closely related to rock drillability index, point load index, density, cone indenter, N-type Schmidt hammer, and seismic velocity. These relationships may also show the affect of [this type of] brittlenees with rock properties used on drillability analysis.

Tensile strength is usually correlated with compressive strength, and it may be possible to use just one of these measures as a proxy for brittleness[5]. This is good, because some (most?) labs only measure compressive strength as a standard test, e.g. in routine triaxial rig tests.

where subscripts min and max denote minimum and maximum values.

Only careful comparison of results from hydraulic fracturing with elastic moduli measured at the wells can tell you if this sort of proxy for brittleness is useful at all in your play. Indeed, some geophysicists are skeptical of this approach, which assumes that a shale's brittleness is (a) a tangible rock property and (b) a simple function of elastic moduli. Lev Vernik stated at the SEG Annual Meeting in 2012[11] that computing shale brittleness from elastic properties is not physically meaningful and we need to find more appropriate measures of frackability.