A zero-phase wavelet has peaks and troughs that line up with interfaces, and has side-lobe events not associated with physical boundaries. Because of this, we see that seismic amplitude is only, at best, a proxy for earth's material contrasts and can be difficult to interpret. The largest positive amplitude corresponds to a downward increase in impedance, and the largest negative amplitude corresponds to a downward decrease in impedance. 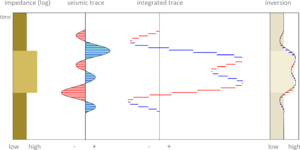 Now consider the integral of the seismic trace. In the illustration, I have colored the positive amplitude values blue, and the negative amplitude values red, for each time sample. The integral is literally the sample-by-sample cumulative sum of amplitudes. Notice how the shape of the trace integral now looks similar to the impedance log (far left). The inflections correlate to the bed boundaries; the integration has done a 90 degree phase rotation of the data. The integrated trace looks more like the geologic contrasts. To think of it another way, if the derivative of impedance is reflectivity, then the derivative of the integrated trace is the seismic trace.

In the final column on the right, the integrated trace has been scaled so that the relative variations approximately match the absolute variations of the actual acoustic impedance log. This curve is merely a squeeze and bulkshift of the integrated trace, to align with the impedance of the background lithology. In practice, scaling seismic measurements to geologically realistic ranges requires the knowledge of rock properties from nearby well logs. The trace on the far right is a rudimentary geology-from-seismic transformation of the data. Although the general shape of the 3-layer model is reconstructed, there are some complications. The first and third layer is too soft, the middle layer is too hard (and wobbly). The appearance of a high impedance doublet is because the seismic is band-limited.

It is important to note that a trace integral does not yield a seismic estimate of impedance, it is only a proxy. Consider it a starting point for seismic inversion, not a substitute for it. In oil sands, for instance, Matt showed how the integrated trace gives a considerably more robust estimate of impedance for reservoir characterization compared to a more time consuming and expensive seismic inversion process.

Integrated trace is not meant to be the final product in a reservoir characterization workflow, but it is a seismic attribute that you should be working with anytime you are are trying to do inversion. It should be a starting point, a sanity check, because it is fast to run, easy to understand, completely deterministic (no guess work). If it is not available on your standard interpretation software, Geocraft is one place where you can do it.