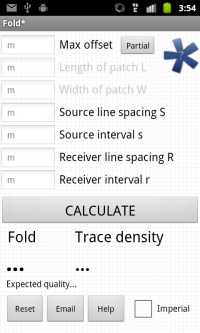 Fold* is a fold and trace density app for Android, for use with onshore seismic programs. It was built in Google App Inventor and made available in the Android Market in May 2011.

The app is a straightforward calculator, with corrections for incomplete patch coverage. The application and the equations are based on Norm Cooper's excellent tutorial on designing land 3D seismic surveys[1]. 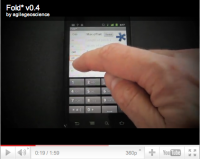 The app computes fold F according to the equation

Maximum offset Xmax
the maximum offset recorded in the patch. If this is not known, and you are more interested in the fold at a given depth, then use the target depth instead.

Source interval, s
the distance between the source points along the source lines.

Receiver interval, r
the distance between the receiver points (sometimes called 'stations') along the receiver lines.

These are illustrated by the small figures (right).

If you enter numbers larger than the maximum offset, then they are ignored. Alternatively, just click Revert to full to discard these values. 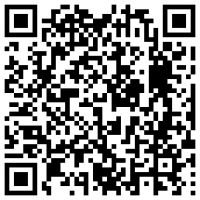