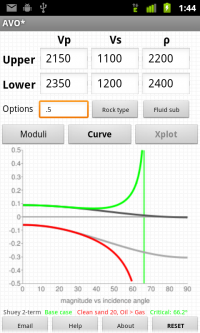 AVO* is a simple AVO modeling tool for geophysicists and seismic interpreters. The idea is to show the behaviour of amplitude with offset for a single interface, based on the Aki–Richards equation and Shuey approximation, widely-used approximations to the Zoeppritz equations. It also implements fluid substitution with the Gassmann equation.

When it was released in June 2011, the app cost $2 in the Android Market, but Agile* applied a 100% discount from September 2011 because of slow adoption.

You provide some acoustic properties: VP, VS (optional), and density. The app does four basic things: 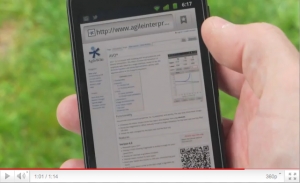 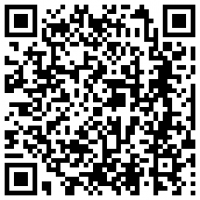 Scan to visit the Market and install

You provide the following parameters for two layers, Upper and Lower:

VS
Optional. S-wave or shear-wave velocity, in m/s. If you leave this field blank, the app assumes that the VP:VS ratio is 2.0.

There are some options for doing fluid substitution. This involves giving some information about the rock you entered for the Lower layer. You can only substitute fluid into the Lower layer.

Rock type
Optional. To do fluid substitution, the app requires the rock type for the Lower layer, because the effect of changing the fluid depends on the porosity and elastic properties of the rock. You can choose the closest approximation to your rock from a list. Future versions will allow you to edit this list and create custom types. If you leave this field blank and choose to do fluid substitution, the app assumes a clean sand with 20% porosity.

There is one optional display parameter.

Plot max
The maximum value for R(0) in the Curve view, and the max for R(0) and G in the Crossplot view. The default is 1.0. Useful values are generally between 0.1 and 0.5, depending on the rocks you entered. 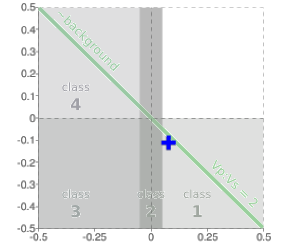 We are looking for ways to build more interpretive help into the app. We are very open to suggestions; please get in touch.

We have not yet found a nice way to add the annotation shown here to the cross-plot screen. 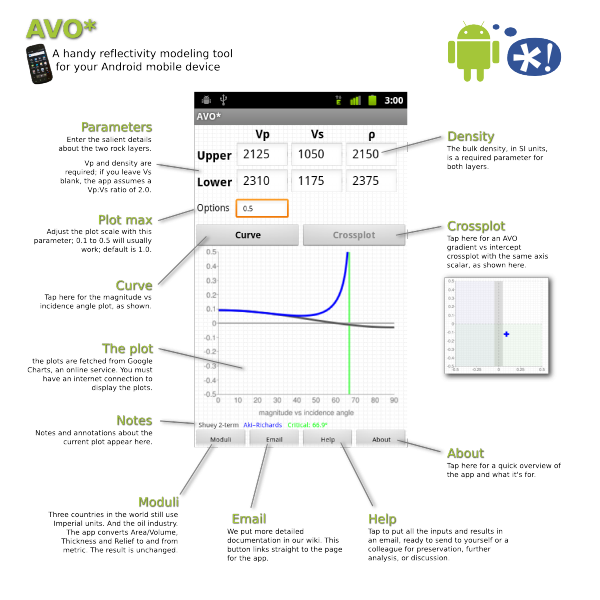