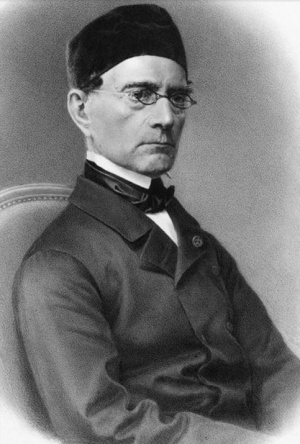 The 1st Lamé parameter, sometimes called Lamé's first parameter, but is more usually referred to simply as lambda, λ. It is an elastic modulus and used extensively in quantitative seismic interpretation and rock physics. It was first described by the French mathematician, Gabriel Lamé (right). Lamé's second parameter is equivalent to shear modulus, μ.

It is often said that λ has no physical interpretation, and most people find it hard to visualize.

λ can also be expressed in terms of Young's modulus, E, and Poisson's ratio, ν. This could be thought of as 'the engineer's perspective':

Goodway and others[1] have described an alternative to (or augmentation of) classic impedance inversion and interpretation. The parameters are closely related: